There are many reasons to be excited about new Glasgow-based five-piece Ímar – not least a line-up featuring current and former members of Mànran, Mec Lir, RURA and Talisk, whose collectively crammed trophy-cabinet includes several BBC Radio 2 Folk Awards and All-Britain/All-Ireland titles. By far the best and biggest reason, however, is how excited the band are themselves.

"As soon as we all sat down to play together properly, it just worked"

“As soon as we all sat down to play together properly, it just worked,” says bodhrán player Adam Brown (RURA), originally from Suffolk. “We were a bit stunned, to be honest; all looking round at everyone else, thinking, ‘Is it just me, or was that really good?’”

“It’s definitely more of a pure-drop trad sound than most of the other bands we’re involved in,” adds Cork-born uilleann piper, flautist and whistle player Ryan Murphy (Mànran), “but I think that’s partly why it feels so natural. We’re going back to the music we started out playing – which is ultimately the reason why we’re all here as musicians.” 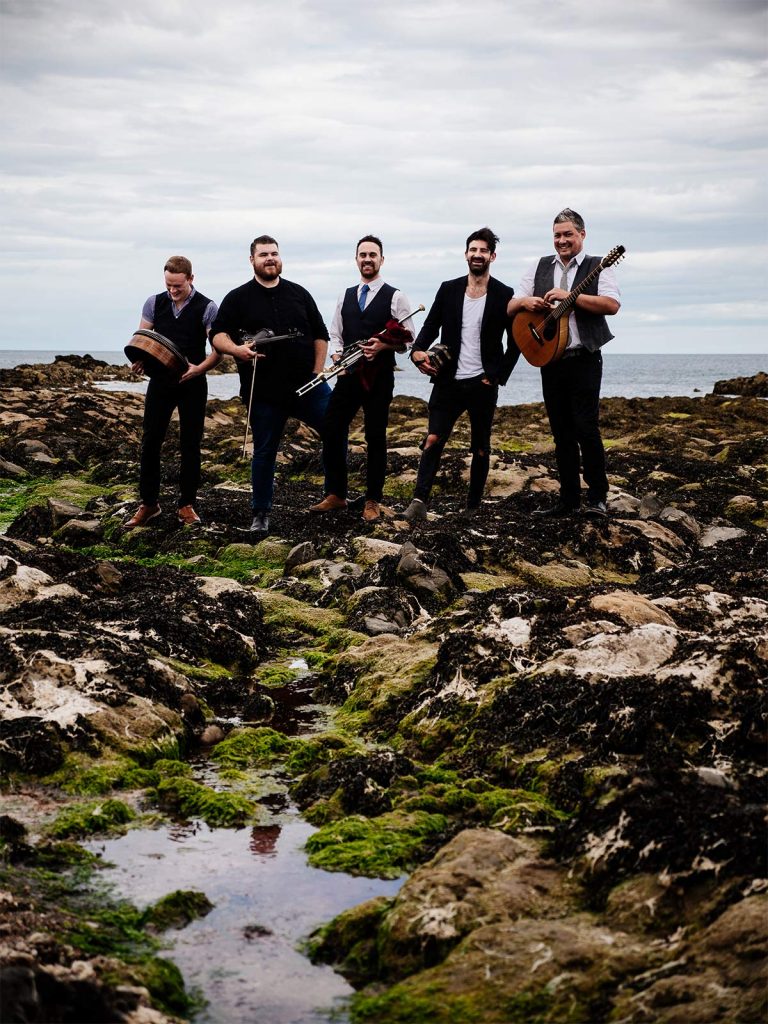 Ímar’s formation also embodies a more personal reconnection with its members’ formative years, dating back long before their recent camaraderie around Glasgow’s justly celebrated session scene. All five of them – also including fiddler Tomás Callister and bouzouki ace Adam Rhodes (Mec Lir), both from the Isle of Man, plus Glasgow native Mohsen Amini (Talisk) on concertina – originally met as teenagers through Comhaltas Ceoltóirí Éireann, the Irish traditional music network that tutors budding players throughout the British Isles and beyond, and stages the annual schedule of Fleadh competitions.

It was via the latter that Ímar’s paths first crossed, as its future members began to amass what’s now a heavyweight collective haul of top prizes - nine All-Ireland and eight All-Britain titles between them - while Murphy is also a double winner of the prestigious Oireachtas contest. Bringing the tally of accolades up to date, Amini won the 2015 BBC Radio 2 Young Folk Award with Talisk, as well as a Danny Kyle Open Stage Award at the Celtic Connections festival, and is also 2017's BBC Radio Scotland Young Traditional Musician of the Year and 2018's BBC Radio 2 Folk Musician of the Year. In 2015, meanwhile, Brown celebrated RURA’s crowning as Live Act of the Year, at the Scots Trad Music Awards.

“We all have a really strong shared background in Irish music – even though we all live in Glasgow, and only Ryan’s actually from Ireland,” Brown says. These foundations underpin many of Ímar’s distinctive qualities, in both instrumentation and material, while also highlighting the cyclical evolution of Scotland’s wider folk scene. Go back a couple of decades or so, and Irish repertoire still predominated at many Scottish sessions and gigs, whereas today Ímar’s sound stands out boldly from the crowd.

“You won’t often hear anyone in Glasgow playing slides and polkas,” Brown points out, “but even in the very first sets we put together, that’s what we naturally gravitated towards.”

Following their musical apprenticeships, the five went their separate ways for a spell. In Murphy’s case, after a Diploma in Traditional Irish Music Performance from the London College of Music, he studied in Limerick at the Irish World Academy of Music and Dance, under Niall Keegan and Mícheál Ó Súilleabháin. Having formed his first band, Éalú, at 18, he subsequently toured with German-based Celtic outfit Cara for four years, before moving to Glasgow to join Mànran in 2013.

Brown grew up amid a folk-loving family, attending numerous festivals as a child, most significantly the nearby world-renowned Cambridge Folk Festival, where – then aged 14 - he first met and jammed with Scottish fiddler Ruairidh MacMillan (now of Blazin’ Fiddles fame). Within a couple of years, Brown was travelling regularly north of the Border to accompany MacMillan at gigs, and made the move to Glasgow when he turned 20 – just in time for MacMillan’s reign as Young Traditional Musician of the Year in 2009. Having by now extended his skills to guitar as well as bodhrán, Brown also worked with top young accordionist Paddy Callaghan before joining RURA in 2014.

Also the progeny of musical households, Callister and Rhodes rank among today’s leading champions of the Manx music revival, a movement dating back to the 1970s, both having taken part as children in the island’s traditional music and dance scenes. Rhodes was still at school when he co-founded the band King Chiaullee, one of the most successful recent Manx acts, before joining Mabon, a five-piece with whom Callister has also toured in recent years. As well as the award-winning trio Barrule, formed in 2012, the pair also feature in new trad/pop outfit Mec Lir, retaining those native musical loyalties even as their geographic paths have converged on Glasgow – in Rhodes’s case via Edinburgh, where he studied music technology; in Callister’s by way of Benbecula, in the Outer Hebrides, home to the University of the Highlands and Islands’ traditional music courses.

Besides being an Anglo-Iranian Scot playing Irish music on the concertina, Amini is also surely unique, among that instrument’s exponents, in citing the contemporary classical pianist/composer Ludovico Einaudi and celebrated film composer Hans Zimmer among his key musical influences. As this suggests, he has built on his traditional roots to develop a strikingly individual style, blending elements of Scottish, Irish and Breton music. While studying chemical engineering in Glasgow (a course now abandoned to pursue music full-time), he formed the trio Muran - voted Best Newcomers at the 2012 Hebridean Celtic Festival - and subsequently Neusa, who wove in elements of jazz, funk and pop. As well as Ímar and Talisk, he is also a member of progressive Scottish band The Lowground.

It’s this combined commonality and diversity of background and influences that fuels Ímar’s unmistakable synergy, centered on the overlapping cultural heritage between Scotland, Ireland and the Isle of Man. All three places once shared the same Gaelic language – the name Ímar comes from a 9th-century king who reigned across this combined territory – and a similar kinship endures between their musical traditions.

“Tomás and Adam [Rhodes] have done a lot of research into the Isle of Man’s music, and some of the tunes they’ve unearthed are really quite similar in style to the music from my area in Cork,” Murphy says. ”So we’re blending these elements to sound like one, even though these tunes might not have been played together for hundreds of years. At the same time, we do want to reflect all the different backgrounds, including Scotland, and we also have tunes from Cork that haven’t been widely played further afield. To begin with, we’ve been leaning mainly toward traditional material, but we’ll probably bring in some of our own compositions too, as well as other contemporary tunes. For now, though, it’s great having no fixed parameters – we’re just seeing what happens.”

“One of the things I really like is not worrying about how to make ourselves sound ‘different’ – ‘modern’ or ‘poppy’ or whatever – in order to get noticed,” adds Brown. “All of our other bands have that element to them, and it’s great, but with Ímar we are kind of going back to basics – which is different in itself these days. In a way, sometimes it’s easier to get people’s attention by doing something a bit weird, whereas properly nailing a set of good tunes, really well, is actually pretty hard.” And all the more so when you’re playing at the level that these five virtuosos have reached, as Amini observes: “This is one band where you definitely have to be on your game.”

According to Murphy, listeners so far have welcomed Ímar’s straight-ahead approach as a refreshing change. “Our feeling is that you don’t have to get mathematical or complicated to sound interesting,” he says. “One of the people we’ve played the tracks to actually said, ‘Great! I don’t have to sit here and count it - I can just relax and tap my feet.”

So look out, world; light the blue touch-paper and stand well back - Ímar are on their way